Our Blogs (Me & Abbie) for Dog Lovers

There are hundreds of dog breeds all over the planet. One of the sweetest breeds of dogs is the Bulldogs. There are at least 12 types of bulldogs across different countries, one of which is the English bulldog. One of the favorites among the Bulldogs because of their sweet and angelic faces. These dogs have been a great companion to humans, despite their aggressive and feisty temperament coming from their original ancestral breed.

About the English Bulldog Breed

In History English Bulldogs are known to have originated from England in their so-called “bull-baiting” in the 1800s. Bull-baiting was a legal sport in England in which they bet on a bulldog who will win in fighting for their lives. Hence, the reason for their ferociousness and ability to defend themselves by being great fighters.

These Bulldogs were kept by some enthusiasts to create a larger population of bulldogs, in to which some of them were mated with pugs and other similar breeds. This mixed sort of breeds that we mainly have right now in the present time.

The Personality and Temperament of the English Bulldogs.

As a pet owner, you should know the type of personality your dog inherits. The best thing that you should know about English Bulldogs is that they are the sweetest breed among the 13 other bulldog breeds. As well as other dogs, they also indulge in attracting human attention. Their cute faces make a great impact on adults and children, so they’re also quite a good pet to have in the family.

Another good thing about the English bulldogs is that they have quite the courage and ability to be qualified as good watchdogs, they love, and sweet personality can be a good cause to trigger their protective ability when it comes to the danger loved ones.

Their temperament depends on who and what sort of animal they encounter. The best way to maintain and stabilize your dog’s temperament is to positively socialize with them every day. 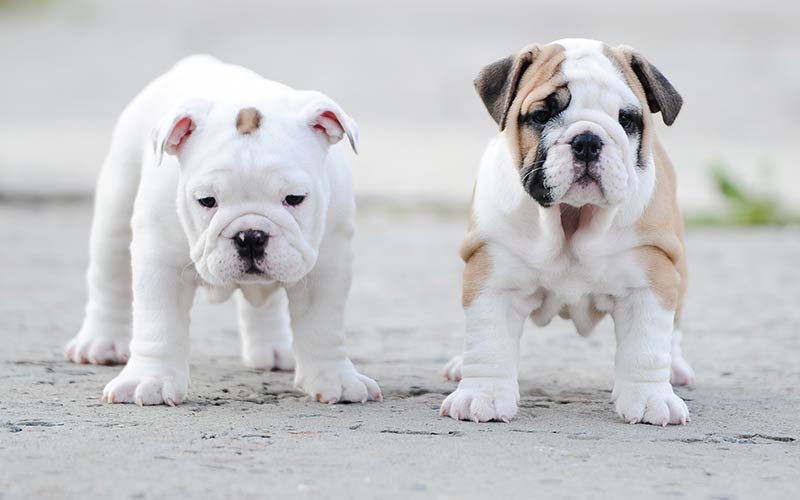 The Lifespan of the English Bulldogs

Even though we cherish and get attached to our beloved dogs as the years pass by, we also need to accept when a dog’s time has already come.

We all know that regular dogs or the natural lifespan of a dog is in between 10-13 years and more if well taken care of. In cases of the English Bulldogs, it is known that their lifespan is about 6-8 years at most. But it doesn’t have to follow that, especially when you take good care of your English Bulldog’s health.

Being very wary of the symptoms of bad health symptoms and also being attentive with the needs of your pet, can be a great way of preventing the least lifespan of the English Bulldogs. Here are a few tips and things you need to know on how to take care of your aging English Bulldog properly:

There are many common diseases out there to both adult and senior dogs in general. You could read our article “English Bulldog Hereditary Issues” for the common and inherited issue in bulldog. But when it comes to senior English Bulldogs, they have their way of sensitivity when it comes to their immune systems.

Here are the most common diseases that a bulldog may encounter:

The proper way of treating and medicating your aged English Bulldog.

To address these problems, we have to know the proper approach when it comes to taking care of and maintaining the health of your English Bulldog.

It is most likely that your English Bulldog gets its regular checkup from the vet. This includes proper grooming, dental care, and vaccinations. Even if your dog is already a senior, it should always be of adequate health to at least reach the maximum capacity of its lifespan. Having your English Bulldog to check up regularly will be of good results to its aging years.

It is also highly recommended always to get your dog some exercise, so it has a healthy and proper diet. Maintaining the body structure of your English Bulldog would help the regulation and adequate alignment of its small bones.

Several things you need to be wary of your aging English Bulldog.

Just like living things grow old, particularly to humans and animals, it is most likely to know what to be wary of when it comes to their aging. Senior English Bulldogs can be common with arthritis, gum disease, cancer, dementia, and vestibular disease. When these symptoms are slowly being inherited by your dog, immediately bring your dog to the vet to properly assess the problem and to give the right medication.

How to know if your senior English Bulldog is already losing its strength.

Your senior English Bulldog may, of course, be tired from playing and standing up too much since it’s already come of aging. This is the perfect time that your dog would need your attention the most because of its inability to become hyper than it was as a puppy.

This may also include lack of appetite and the losing of interest in the things your dogs used to do regularly. Make sure to also check on its joints if its already unable to stand up. Always check up on your senior dog, especially when it’s starting to have difficulties in breathing and in responding to your calls.

Having to care for your aging English Bulldog would have high chances of extending its natural lifespan. Since we all know that 6 to 8 years of life for a dog is concise, we, of course, want to spend a long time on our beloved pets. Always be a good pet owner to your dog since commitment is a big thing, especially when it comes to taking care of one’s life.

Made at the tip of Africa. ©